It is not necessary to take additional precautions to safeguard livestock, pets or gardens. Officials report that aerial treatment remains the most effective way to combat high mosquito populations across large acreage and areas not accessible or manageable by ground.

Mosquito Control officials report that mosquito populations, particularly in areas not accessible by vehicle continue to rise, elevating the risk of mosquito-borne illnesses that can affect both people and their pets, livestock, as well as nuisance mosquitoes. 26 traps placed throughout Orange County captured more than 7400 mosquitoes this past week – a 550 percent increase in mosquito population (week of September 11 and September 18). Locally, mosquitoes may transmit illnesses/diseases to include West Nile Virus, Eastern Equine Encephalitis and Dog Heartworm, as well as the Zika virus.

The map below includes the areas identified for aerial treatment. 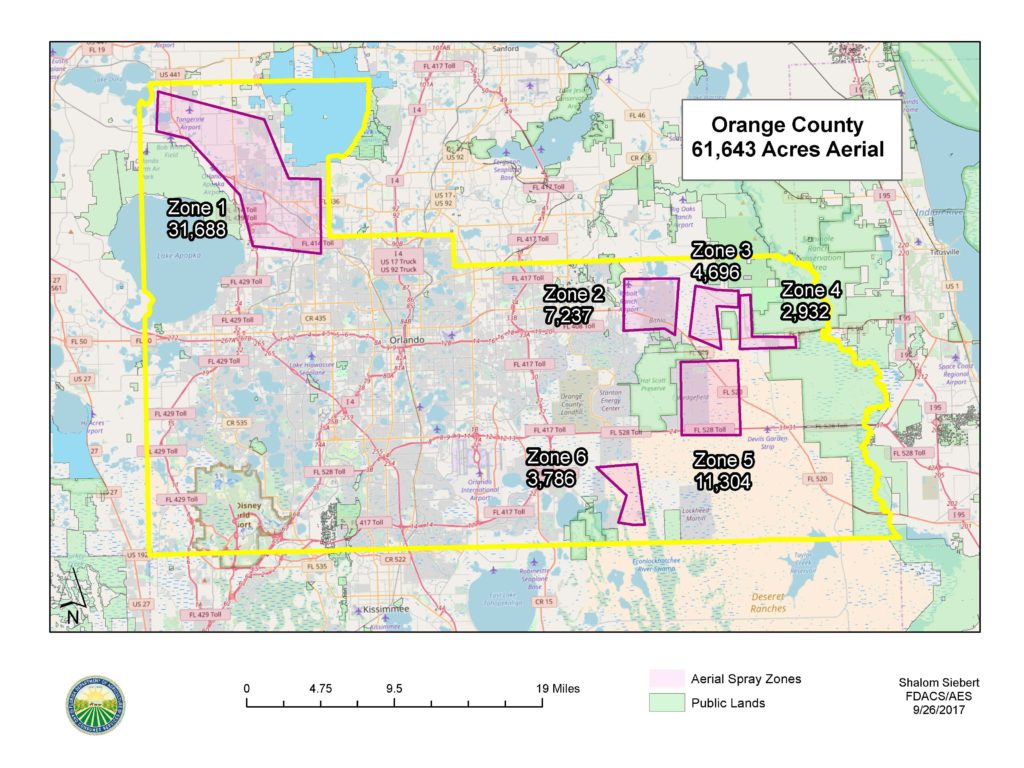 While not all mosquitoes carry illness or disease, rising populations alone can be a nuisance and distract from the ability to enjoy the outdoors.

The decision follows as other Central Florida counties also implement aerial spraying. Most recently, Orange County turned to aerial spraying in July of 2017 in response to heavy rainfall, but prior to the county had not needed to utilize aerial spraying since 2011.

Orange County Mosquito Control personnel use several techniques to help control the various mosquito species in addition to aerial treatment, while being sensitive to the environment and other insects. All control materials used are approved by the EPA and the Florida Department of Agriculture and Consumer Services. The Centers for Disease Control has created a Sitio Web specific to aerial treatment that includes frequently asked questions for residents to review if interested. These efforts strategically take place during the evening and do not include the application of materials known to be harmful to humans, animals or other insects, including bees when applied according to the label.

Residents are encouraged to call 311 if rising mosquito populations become nuisance or if you have questions. Residents can find additional information on-line at ocfl.net/mosquito.